Back in the 1970’s when I started doing custom leather work as a part time business, I wanted a leather sewing machine to save time from hand sewing leather. I tried using my mother’s domestic White Co. Sewing Machine. Even though I tried a leather needle, it didn’t have the required power to go through the leather. The needle just hit the top of the material and that was all it could do. I then bought an old black antique domestic sewing machine that had been converted from treadle with an electric motor. It had more power and I was able to sew light garment leather with it. A leather needle is shaped like a spear to slice through the leather as opposed to a round needle which is used for fabric.

Being familiar with this machine, I went looking for a second hand one to buy. As a teenager all I could afford were very old models. My first industrial had to be greased & oiled a lot since it was partly seized up from sitting unused for many decades in someone’s shed and needed lot’s of adjustment. It was operated by a foot treadle instead of a motor and had a short arm. Over the years I bought three older treadle patcher industrial sewing machines ranging from short arm to long arm and from Singer to Adler brands. However all needed a lot of adjustment continually as parts were worn.

In 1986, I made the decision to move from part time to a full time leather business. After a few years as this being my sole source of income, I realized in order to make a go of it, I had to become more productive. I had to get out of the labour intensive hand sewing of thick leather and have dependable accurate sewing machines.

In 1990 I contacted Bridgewater Sewing Centre in Nova Scotia, Canada to buy some new industrial leather sewing machines. What a difference working with a new machine. Over the years, the o/web/20151212011109/http://bridgewatersewingcentre.com/wners of Bridgewater Sewing Centre have been great in servicing them. Carl and Neil Milheron travel weekly to the Halifax Regional Municipality servicing all kinds of industrial machines.

Neil advises that the key to keeping your leather sewing machine working well is to regularly oil it with sewing machine weight oil. If you sew 6 – 7 hours a day, then oil your stitcher daily. If you sew a part of a day for a couple days a week then oil weekly or less frequently if used less. 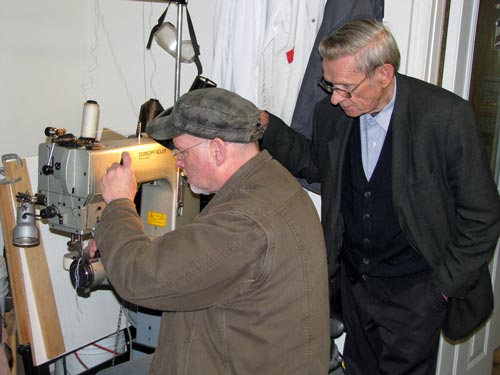 The heavy duty Adler stitcher shown above can sew through firm leather piled 5/8 inch thick. Although I don’t do harness work, I use it to sew thick leather knife cases, tough dog collars, industrial belts and cases. This is a powerful leather sewing machine. It takes very thick thread. I normally use #207 and #277 nylon thread for sewing thick leather products. However this leather sewing machine easily takes much thicker thread than even this.

My first brand new Singer patcher 29U172A shown below, hasn’t changed much in design from the black antique treadle patchers that I first owned. Instead of the leather pulley belt attaching to a treadle wheel, it now attaches to an industrial motor. The unique thing about this leather sewing machine is that it can reach inside tight spaces within shoes, boots, purses and cases plus it can sew in 360 degrees. The big black wheel on the front can be attached to the end or the front of the stitcher depending on your preference. I find the reach easier when it is in front. The typical thread used in shoe repair shops and for sewing most light and medium thickness leather products is a #69 nylon thread.

The leather sewing machine below is used to sew belt pouches, purses, guitar straps, portfolios, money belts, wallets etc. The reason this machine works great with leather is that it pulls the leather from the walking foot as well as the bottom feed. Therefore if you are working with a couple layers of soft leather, both layers will be fed evenly through the machine. Shown in the background are various colors of #69 nylon thread that I use which can be fed over to the stitcher. The cylinder arm makes it versatile for sewing inside leather objects. However I have a home made table I attach around the cylinder for when I require a flat bed sewing machine set up for sewing leather products I want to lay flat. 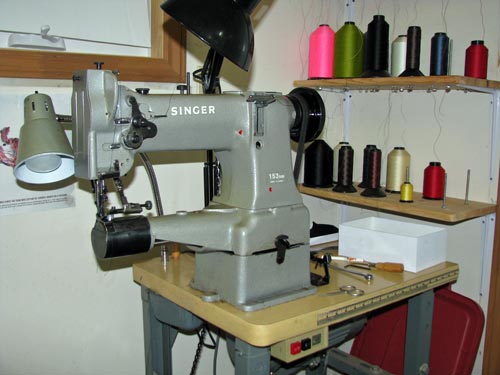 There still are other styles of leather sewing machines I would like to have should I have the space or finances to do so. For example a post machine with a roller feed would make it easier for doing more intricate stitching patterns. Computerized machines would be neat for massive production of the same stitch pattern but my production level isn’t anything near the requirement to justify the many thousands of dollars that type of machine would demand.

Although I mainly use industrial leather sewing machines now for my leather work, I very much appreciate the beauty of hand sewn leather products. There are still leather craft projects that require me to use hand
leather sewing tools. I still own the first hand awl my uncle made for me as a teenager and remember how I was taught to make thread by rolling 6 strands of linen thread and waxing the rolled strands with beeswax or applying pitch.